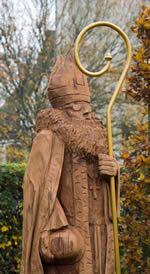 Statue of American St. Nicholas, Richard Brookins, was unveiled in 2014. It was carved by a local carpenter from an old Ardennes Forest oak.
Photo: David Brookins

It was 1944 in the small Luxembourg town of Wiltz. The war had taken a heavy toll as Wiltz had been a center of resistance and suffered brutal reprisals. People were shot in the town square and men were forced into the German army or sent to concentration camps. The German occupation lasted four years before the Germans pulled out in September 1944. After the town's liberation Allied soldiers rotated through Wiltz for R&R (rest and recuperation).

The 112th Regiment, part of the 28th Infantry Division, Pennsylvania National Guard (known as the Keystone Division), had been sent to relieve troops battling to retake Huertgen Forest. After sustaining heavy casualties they were sent to regroup and rest in Wiltz. The people there had very little and had not been able to celebrate Christmas or anything else during the years of occupation.

A few days before Thanksgiving Corporal Harry Stutz told his buddy, Corporal Richard Brookins, "I think we should give this town a Christmas party, A St. Nicholas Day. For hundreds of years here in Wiltz, they had a celebration on the fifth of December, the eve of St. Nicholas Day. A man dressed as St. Nick paraded through the town and gave candy to the kids. Kids here haven't celebrated St. Nicholas Day for nearly five years because of the war. Some of them have never seen St. Nick at all."

Harry talked to the local priest, Father Wolffe, who invited all the townspeople. The soldiers donated all the candy and chocolate from their rations and even some of their gifts from home. The field kitchen would make donuts and bake cakes for the party.

Who would be St. Nicholas? Harry said, "You, Dick! You're tall, like Father Wolffe. You can wear his fancy robes and a bishop's hat." Twenty-two year-old Dick wasn't so sure—he'd never even played Santa Claus. "You've got to do it," Harry said, "for the kids of Wiltz." So, Dick agreed, yes, for the kids, but really for everyone, too.

In the afternoon of December 5th, Dick was taken up to Wiltz Castle, home to a convent school. Nuns helped him dress in Father Wolffe's vestments—cassock, surplice, and a cape, high in the front, but making a train behind him. A rope beard tied on with a ribbon and topped by a bishop's miter completed the costume.

Two little girls, dressed in white with angel wings, were St. Nicholas' angel helpers. St. Nicholas sat with his angels in the back of a jeep, ready to go to the town square. Father Wolffe made the sign of the cross over them, giving a blessing, "May God and the spirit of Saint Nicolas be with you."

Women and children lined the streets—the only men present were men from the 28th Division. A soldier played the guitar while children sang and danced. When they saw Saint Nicolas, everyone cheered.

Children's faces glowed with excitement and joy. The new American St. Nicolas spoke to each child in German, asking their names and offering treats. Walking about as bishop, he made the sign of the cross, blessing children as he passed. After about 40 minutes, the entourage climbed back in the jeep to drive up to the castle, where more children waited.

Saint Nicholas blessed the children at the castle, then, with his angels carrying his train, he was escorted to a large chair inside the castle. Christmas Committee GIs were at tables, handing out treats, while the nuns served hot chocolate made from the soldiers' melted chocolate bars.

Everyone settled down and songs, dances and skits entertained and honored Saint Nicolas. Next, children lined up to talk to St. Nicholas, sit on his knee and tell him what they wanted for St. Nicolas Day. St. Nicholas nodded wisely, repeated some words such that anyone would think he really understood. He kissed children on the cheek or forehead, patted them on the head or chucked them under the chin, before turning to the next child.

After the last child was with Saint Nicholas, the Mother Superior thanked Saint Nicolas, saying, "The children are very happy. They will remember, as will we." The saint thanked his two angels, and left as the last song was sung. He quickly took off the robes so the priest could get to Mass, and the celebration was over.

It was the best St. Nicholas Day in years.

An Associated Press photographer was in Wiltz and his photograph of Brookins as St. Nicholas was published in newspapers across the United States. His own family was delighted to see him in their local paper.

Just two weeks later, Wiltz was bombed, killing many people including children. Wiltz was a major battleground in the Battle of the Bulge and the town was very nearly destroyed.

Decades later, in 1977, Richard Brookins received a phone call, completely out of the blue, from someone named Frank McClelland. McClelland had also been with the 28th Infantry Division, but didn't know Brookins. However, McClelland had been back to Europe several times and had gotten to know people in Wiltz. They asked him to find the American St. Nicolas. This was followed by a long letter from Wiltz, Luxembourg, asking if he and his family would come to Wiltz to celebrate. "It is very special and we will celebrate in December on Saint Nicholas Day. And it would be an honor to have the very first American Saint Nicholas there."

The first American St. Nicolas? Had there been more?

Before the war, St. Nicolas celebrations were just in the home. However, because Brookins and the other American GIs had brought Saint Nicholas Day back to the children, Wiltz began a tradition to remember the American St. Nicolas and all the soldiers who created St. Nicolas Day in 1944. Each year someone was chosen to be the American Saint Nicolas. Then he would go through the town, greeting children and giving treats, continuing up to the Castle for a celebration, just like it was done in 1944. Everyone in Luxembourg celebrates Saint Nicolas, but in Wiltz American Saint Nicolas is special and unique.

And many more times, too.

In 2009 Richard Brookins, at the age of 87, made what was thought to be his final visit to be American Saint Nicolas in Wiltz—celebrating the 65th anniversary of the first American Saint Nicolas and the rebuilding of Wiltz. Celebrating, too, a small town in the Ardennes that has a long memory with gratitude and affection for the American troops who brought protection and joy in a time of great suffering and sorrow.

However, he came again in 2014, at the age of 92, to celebrate the 70th anniversary of the American soldiers' party for the children of Wiltz.

The "American St Nick" once again rode in a jeep to greet townspeople along the way and to address the crowd at the castle, where he had distributed the treats to children seventy years before. The town has not forgotten the man who personified the generosity of the American soldiers stationed briefly in Wiltz.

"This is more than a Christmas party to the people there," his son, David Brookins, said. "This is their liberation. . . . The occupation and annexation, the brutality, the executions, it's all so deeply ingrained in them. And the counterpoint is the Americans coming from so far away, fighting such an incredible war for their liberty and not asking anything from them. And on top of that, the soldiers who were a long way from home and struggling with their own problems took time to give the kids a party."

Richard Brookins knows he didn't do much. But he's proud nonetheless of how it has resonated and what it stood for.

"As time goes by, it's been amazing to me how that one little (event) in the war, to make kids happy, has become so important," he said. "I go there and the people come out in droves—they just want to see me. They want to see the American who represents all the Americans who gave them their freedom. . . . I say to myself, 'How come I'm lucky enough to be that person?'"

American St. Nick: A True Story by Peter Lion, Perfect Paperback, 2015.
This is a new updated and retold account of the 28th Infantry bringing Saint Nicolas to the children in Wiltz during World War II. Purchase from amazon.com, amazon.ca or amazon.uk.

The American St. Nick: Based on the True Story of the 28th Division's Compassion and Heroism in WWII Europe by Peter Lion, WindRiver Publishing, St. George, Utah. Copyright © 2003. Purchase from amazon.com, amazon.ca or amazon.uk.

back to the United States