Series
Nicholas: A Garland of Tales
adapted from Pamela Grenfell Smith
Six St Nicholas Stories
for the days before Dec. 6
by Christine Natale

Related Stories
St. Nicholas and the Star Children
a gentle Waldorf tale
The Little Nicholas
by Winfried Wolf
American St. Nicolas
A WWII story of grace and hope
Another Christmas Carol
A modern story of the spirit of St. Nicholas
How St. Nicholas Chooses the Most Worthy for Gifts
retold by Michael Roman
St. Nicholas Becomes Santa Claus
fanciful tale by Edward Hays
The Miracle of the Great St. Nicolas
Satire by Anatole France

Anatomical Examination of the Bari Relics

In the 1950s the crypt containing Saint Nicholas tomb in the Basilica di San Nicola, Bari, Italy, needed extensive work on the floors and walls. This necessitated taking the heavy cover off the tomb and removing Saint Nicholas' bones for the first and only time since they were interred by Pope Urban II in 1089 (when the tomb was completed).

A special Pontifical Commission, led by Monsignor Enrico Nicodemo, Archbishop of Bari, arranged for the examination of the relics to be carried out in the commission's presence. Luigi Martino, professor of human anatomy at the University of Bari, was engaged to perform the examination. He was assisted by his colleague Dr. Alfredo Ruggieri.

The bones had lain undisturbed, neither touched nor seen, for 866 years, until the night of May 5th, 1953. The bones were found scattered in no particular order within the tomb. The skull had been carefully placed at one end (see photo). The bones were removed, to be identified and inventoried. Besides the skull, there were long bones, short bones, and many tiny bone fragments. Among the bones there were also small stones and gravel, presumed to have been gathered hastily along with the bones by the Bari sailors in 1087.

The tomb had about ¾ of an inch of clear liquid in the bottom and the bones were wet, with marrow spaces filled with water. After the bones and the liquid were removed the grave was dried. A thorough examination in strong light found no cracks in its very thick, solid, compact and hard stone walls.

Condition of the bones 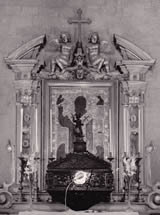 The bones themselves were very fragile and fragmented. The skull was in the best condition, showing that it was probably handled with the most care when the bones were brought to Bari. The skull is complete, missing only the back half of one jaw. It contained many teeth, with some still in their sockets. Most of the other bones were broken, some extensively, and many chipped.

After the initial examination and inventory the bones were placed in a glass urn, visible for veneration by the faithful during the four years of renovation works in the crypt. It is reported that the bones continued to yield manna during that time.

When the crypt repairs were complete, the bones were examined a second time to preserve their images and characteristics. Both anatomical and anthropological examinations were performed on the night of May 7th, 1957. Luigi Martino, assisted by colleagues Alfredo Ruggieri and Luigi Venezia, carried out the examinations.

This time thousands of minutely-detailed measurements and x-ray photographs (roentgenography) were taken, along with careful anatomical measurements. When the examination was complete, the bones were carefully reinterred.

These measurements allowed the reconstruction of an articulated skeleton, revealing the proportions of the individual. The anthropometric information established that the skeleton belonged to an old person because the bones were extremely fragile and thinning. Because so many bones were broken, they woiuld have already been brittle and easily broken in 1087. The presence of stones and gravel indicate that thy were already fragmented and it had been difficult to separate bone fragments from gravel in the Myra tomb. As the bones were already 737 years old in 1087, it is not surprising that they were fragile and easily broken, especially when hastily gathered by sailors not used to handling such delicate objects. As they were probably not cushioned adequately to protect them from jarring by the motion of the sea, they no doubt were broken further during the voyage. One vertebra shows a thin slice of bone had been removed with a cut from a sharp knive, such as would be made to remove a relic.

These two examinations showed the bones to be part of one skeleton of a man over seventy years of age (historical accounts report St. Nicholas' death at around age 75, reports range from 72 to 80 years of age). The man was of average height and slender-to-average build. He was 5 feet 5¾ inches tall (1.67 meters). Shoulders would have been 15¾ inches wide (40 cm), girth, 33.86 inches (86 cm) or slightly more, hands 7½ inches long (19 cm), and feet 10¼ long (26 cm) by 4 inches wide (10 cm). Circumference of the head would have been 16.69 inches (52.4 cm). The head had a normal shape, slightly elongated. The face was mostly short and wide, with the chin pushed forward more than usual. The forehead was broad, eye sockets quite large and the nose medium-sized. The hollowed cheekbones protrude slightly. Strong teeth showed recent decay and also indicated that his diet was primarily vegetarian.

The skeleton showed evidence of suffering such as would have been endured during confinement in damp and unhealthy prisons (thought to have been for several years at the age of 51). He suffered from severe chronic arthritis of the spine and pelvis and the skull showed bone thickening that would have caused chronic head pain.

Luigi Martino used the numerous photographs of the skull from various angles—front, side and oblique—to discover what the face may have looked like. So, projecting the soft tissues, he drew eyebrows, eyes and eyelids, nose, lips, chin, cheeks, and beard, corresponding to the skeletal bone. The result was a rather ascetic, thin face with large eyes and forehead. He believed it corresponded to various representations of the saint, the closest being a mosaic of Saint Nicholas with the Virgin and Saint John the Baptist in the St. Isidore Chapel in the Basilica of Saint Mark in Venice.