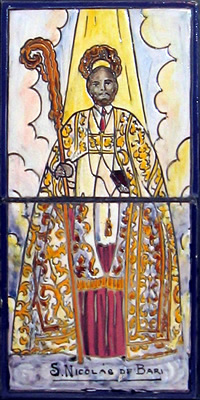 For more than 400 years Tinkunaco has been celebrated in La Rioja, Argentina. Thousands joyfully crowd the plaza each year to celebrate this unique festival. People come from the city, beyond, and from other provinces; they come on foot and on horseback. Held between December 31st and January 3rd, the festival is rooted in the clash between native peoples and Spaniards on Easter 1593.

The Diaguitas (indigenous peoples in this region), fed up with bad treatment from Spanish colonizers, attacked the city. Forty-five chiefs, with a force of 9,000, took the fort of Las Padercitas.

The Spanish called on San Francisco Solano to negotiate peace. He did so by proclaiming Jesus, who had been accepted by the Diaguitas, to be the mayor. At the time Franciscans, Mercedarians, Dominicans and Jesuits were all established around the central plaza. The Jesuits developed a liturgical ceremony bringing together Catholic liturgy and native elements. An indigenous brotherhood devoted to the city's Patron Saint Nicholas and the Little Jesus (Niño Dios) dressed as a mayor, was established with the Mayor Jesus being declared the mayor for the indigenous people.

In this way the Jesuits brought together these two different worlds, transcending differences without bloodshed. Their ceremony commemorated the peace and developed into Tinkunaco.

The Tinkunaco begins at noon on December 31 when the statue of San Nicolas comes out of the Cathedral San Nicolas de Bari. At the same time Niño Dios is brought in procession from the Church of San Francisco on the opposite corner of the plaza.

Each statue are carried in procession on a litter, followed by a large entourage. San Nicolas is a carved walnut figure brought from Peru in 1640, dressed in sumptuous vestments. His followers come with a band, bearing large brightly beribboned poles. They represent the Spanish feudal lords, marching as a brotherhood whose elders are named for the twelve apostles and disciples of Christ. Niño Dios is not a baby, rather, he looks like an eight-year-old child, dressed like a colonial mayor in a black velvet coat, a black hat, and carrying a mace. His group, represents the Diaguitas, wear headbands or crowns, rawhide sandals, and ponchos or scapulars. They sing songs in Quechua.

The Christ Child mayor's group are called Aillas, who wear rawhide sandals and indigenous headbands. San Nicolas meets the Child Mayor in front of the Casa de Gobierno (Government House), the capital building for the province. There San Nicolas and, joined by everyone in both groups, genuflects three times before Niño Dios, recognizing Christ's authority. Flags and banners are lowered to the ground and everyone is seen as equal. Together they continue to the Cathedral, where the Child stays for three days.

The festival lasts four days, with repeated processions amid the festivities as belonging to the religious and civic celebration. Many government and religious figures, including the governor, the Bishop of La Rioja, provincial officials, senators and more. It is the most important day of the year for La Rioja because Tinkunaco demonstrates the region's faith tradition.