In northern and central Croatia, St. Nicholas (Sveti Nikola) brings gifts to children on his feast day, December 6th. It is the main day for gift-giving. Even though Christian holidays were out of favor under Communist rule, many families still celebrated privately.

On the eve of St. Nicholas Day, children polish their boots until they gleam before placing them on a windowsill to wait for the good saint. St. Nicholas fills good children's shoes with candy, fruit, dried fruit and gifts. Krampus, who comes along with the saint, leaves golden twigs for naughty children—the worse the behavior, the larger the twig. Every child gets a twig as a warning; each gets sweets as well.

The sea is important to Croatia, with its long coastline with many ports and islands. As such, fishing, shipping and ship building are important aspects of life in Croatia. As patron saint of sailors and fishermen, St. Nicholas icons are often placed on Croatian ships and boats.

The fishing village of Komiza, on the island of Vis, honors St. Nicholas as the patron saint of sailors, fishermen and travelers. When a boat at sea is in line with the Church of St. Nicholas, sailors doff their hats, greet the saint, and pray, "Saint Nicholas help us with our voyage and fishing."

As part of St. Nicholas feast day, the saint's statue is taken out in procession and an old boat is burned as an offering, a symbol of thanks and gratitude, to invoke St. Nicholas' protection in the next year. The villagers ask Nicholas to give his blessing to their bay, fishing tools, and new boats. Visitors come from miles around for the spectacle. The festive Thanksgiving Mass is followed by a procession. 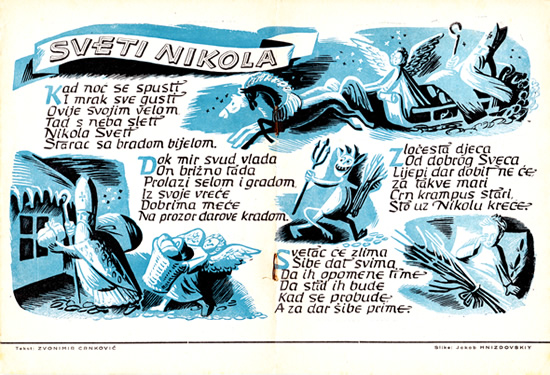 Statues and images in public places