In Roman Catholic areas of southern Germany, such as Bavaria, Sankt Nikolaus still comes as a bishop with flowing beard and a bishop's miter and staff. Houses are thoroughly cleaned and children clean and polish their shoes or boots in preparation for the saint's visit. On the evening before St. Nicholas Day, children put letters to the good saint along with carrots or other food for his white horse or donkey on a plate or in their shoes. These are left outside, under the bed, beside a radiator, or on a windowsill in hopes of finding goodies from St. Nicholas the next morning. During the night Sankt Nikolaus goes from house to house carrying a book in which all the children's deeds are written. If they have been good, he fills their plate, shoe or boot with delicious fruits, nuts and candies. If not, they may find potatoes, coal, or twigs.

Children practice poems and songs for Sankt Nikolaus and make little presents for him. Friends and neighbors come to share in the fun. Candles on the Advent wreath and the big Christmas pyramid with a nativity scene in the center are lit. Stories are read or songs sung as everyone waits for a knock on the door. When it comes, they all know it is Sankt Nikolaus, who comes in with his big book, golden crozier, and a big heavy sack. One of the children gets to hold the golden staff. Each child (and sometimes adults, too) stand in front of the saint. Nikolaus asks each child, "Have you behaved yourself?" "Do you do your homework?" "Do you keep your room tidy?" "Do you help your parents?" Then he opens his big sack and gives presents and candies and treats for all to share. And they give him the little surprises. Nikolaus leaves quickly as he has many places to visit. He travels with a white horse or a donkey and sometimes Ruprecht, his most common German companion, is with him.

Some areas have local customs. In Stuttgart, for example, kids dress up as Nikolaus and go door-to-door asking for sweets—much like trick-or-treating in the United States.

St. Nicholas is the patron saint in the Mosel who protects the river people from danger. From the time of the Celts and Romans ships have been towed upriver  manpower and later by horses and oxen. Towing was dangerous and St. Nicholas chapels and shrines were built along the Mosel. Nicholas fraternities and festivals developed. They are still observed in Bernkastel, Reinsport and Urzig. 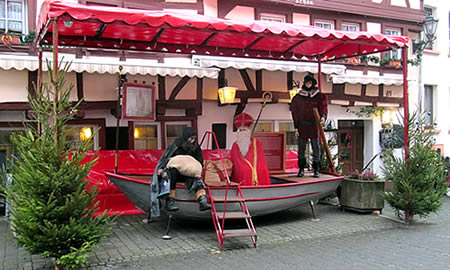 St. Nicholas boat in Bernkastel where he is the patron saint of the Mosel and the Bernkasteler Nikolausbruderschaft is still active.
Photo: Christiane De Coster, used by permission

In some parts of Germany Nikolaus has come to look more like Santa and Father Christmas and comes at Christmas, not St. Nicholas Day. The influence of other countries, television, and large department stores makes it more difficult to find holy Bishop Nicholas. Even when he comes on December 5th, his appearance sometimes shows that Germany's long-standing gift-givers, Sankt Nikolaus and the Christkindl, are being transformed.