Series
Nicholas: A Garland of Tales
adapted from Pamela Grenfell Smith
Six St Nicholas Stories
for the days before Dec. 6
by Christine Natale

Related Stories
St. Nicholas and the Star Children
a gentle Waldorf tale
The Little Nicholas
by Winfried Wolf
American St. Nicolas
A WWII story of grace and hope
Another Christmas Carol
A modern story of the spirit of St. Nicholas
How St. Nicholas Chooses the Most Worthy for Gifts
retold by Michael Roman
St. Nicholas Becomes Santa Claus
fanciful tale by Edward Hays
The Miracle of the Great St. Nicolas
Satire by Anatole France

The Festival of St. Nicholas

by Mary Mapes Dodge, from Hans Brinker or the Silver Skates

This popular account of St. Nicholas in the Netherlands has been reprinted in many Christmas story anthologies. Mary Mapes Dodge included "instructive features" that stand quite apart from the novel's story line to teach children about other places. This exceprt is one of those features. 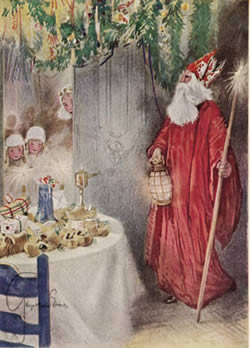 We all know how, before the Christmas tree began to flourish in the home-life of our country, a certain "right jolly old elf," with "eight tiny reindeer," used to drive his sleigh-load of toys up to our housetops, and then bound down the chimney to fill the stockings so hopefully hung by the fireplace. His friends called him Santa Claus; and those who were most intimate ventured to say, "Old Nick."

It was said that he originally came from Holland. Doubtless he did; but, if so, he certainly, like many other foreigners, changed his ways very much after landing upon our shores.

In Holland, St. Nicholas is a veritable saint, and often appears in full costume, with his embroidered robes glittering with gems and gold, his mitre, his crosier, and his jewelled gloves. Here Santa Claus comes rollicking along on the 25th of December, our holy Christmas morn; but in Holland, St. Nicholas visits earth on the 5th, a time especially appropriated to him. Early on the morning of the 6th, which is St. Nicholas Day, he distributes his candies, toys and treasures, and then vanishes for a year.

Christmas Day is devoted by the Hollanders to church-rites and pleasant family visiting. It is on St. Nicholas Eve that their young people become half wild with joy and expectation. To some of them it is a sorry time; for the saint is very candid, and, if any of them have been bad during the past year, he is quite sure to tell them so.

Hilda van Gleck's little brothers and sisters were in a high state of excitement that night. They had been admitted into the grand parlor: they were dressed in their best, and had been given two cakes apiece at supper. Hilda, who was fourteen, was as joyous as any. So she sported and laughed and danced as gayly as the youngest, and was the soul of all their merry games. Father, mother and grandmother looked on approvingly; so did grandfather, before he spread his large red handkerchief over his face, leaving only the top of his skullcap visible. This kerchief was his ensign of sleep.

Earlier in the evening, all had joined in the fun. In the general hilarity, there had seemed to be a difference only in bulk between grandfather and the baby. Indeed, a shade of solemn expectation, now and then flitting across the faces of the younger members, had made them seem rather more thoughtful than their elders.

Now the spirit of fun reigned supreme. At last matters grew so uproarious that the grandsire's red kerchief came down from his face with a jerk. What decent old gentleman could sleep in such a racket! Mynheer van Gleck regarded his children with astonishment. The baby even showed symptoms of hysterics. It was high time to attend to business. Mevrouw suggested that, if they wished to see the good St. Nicholas, they should sing the same loving invitation that had brought him the year before.

The baby stared, and thrust his fist into his mouth, as mynheer put him down upon the floor. The other children, each holding a pretty willow basket, formed at once in a ring, and moved slowly around the little fellow. Mevrouw commenced playing softly upon the piano; soon the voices, rose,—gentle, youthful voices, rendered all the sweeter for their tremor,—

"Welcome, friend! St. Nicholas, welcome!" During the chorus, sundry glances, half in eagerness, half in dread, had been cast toward the polished folding-doors. Now a loud knocking was heard. The circle was broken in an instant. Some of the little ones, with a strange mixture of fear and delight, pressed against their mother's knee. Grandfather bent forward, with his chin resting upon his hand; grandmother lifted her spectacles; Mynheer van Gleck, seated by the fireplace, slowly drew his meerschaum from his mouth; while Hilda and the other children settled themselves beside him in an expectant group.

The knocking was heard again.

"Come in," said the mevrouw, softly.

The door slowly opened; and St. Nicholas, in full array, stood before them. You could have heard a pin drop. Soon he spoke. What a mysterious majesty in his voice! what kindliness in his tones!

"Karel van Gleck, I am pleased to greet thee, and thy honored vrouw, Kathrine, and thy son, and his good vrouw, Annie.

"Children, I greet ye all! Good children ye have been, in the main, since I last accosted ye. Diedrich was rude at the Haarlem fair last fall; but he has tried to atone for it since. Mayken has failed, of late, in her lessons; and too many sweets and trifles have gone to her lips, and too few silvers to her charity-box. Diedrich, I trust, will be a polite, manly boy for the future; and Mayken will endeavor to shine as a student. Let her remember, too, that economy and thrift are needed in the foundation of a worthy and generous life. Little Katy has been cruel to the cat more than once. St. Nicholas can hear the cat cry when its tail is pulled. I will forgive her, if she will remember from this hour that the smallest dumb creatures have feeling. and must not be abused."

As Katy burst into a frightened cry, the saint graciously remained silent until she was soothed.

"Thou, Hendrick, didst distinguish thyself in the archery match last spring, and hit the center, though the bird was swung before it to unsteady thine eye. I give thee credit for excelling in manly sport and exercise; though I must not unduly countenance thy boat-racing, since it leaves thee too little time for thy proper studies.

"Lucretia and Hilda shall have a blessed sleep tonight. The consciousness of kindness to the poor, devotion in their souls, and cheerful, hearty obedience to household rule, will render them happy.

"With one and all I avow myself well content. Goodness, industry, benevolence and thrift have prevailed in your midst. Therefore, my blessing upon you; and may the New Year find all treading the paths of obedience, wisdom and love! Tomorrow you shall find more substantial proofs that I have been in your home. Farewell!"

With these words came a great shower of sugarplums upon a linen sheet spread out in front of the doors. A general scramble followed. The children fairly tumbled over each other in their eagerness to fill their baskets. Mevrouw cautiously held the baby down upon the sheet till the chubby little fists were filled. Then the bravest of the youngsters sprang up and threw open the closed doors. In vain they searched the mysterious apartment. St. Nicholas was nowhere to be seen.

Soon they all sped to another room, where stood a table, covered with the whitest of linen damask. Each child, in a flutter of pleasure, laid a shoe upon it, and each shoe held a little hay for the good saint's horse. The door was then carefully locked, and its key hidden in the mother's bedroom. Next followed good-night kisses, a grand family procession to the upper floor, merry farewells at bedroom doors, and silence, at last, reigned in the Van Gleck mansion.

Early the next morning, the door was solemnly unlocked and opened in the presence of the assembled household; when, lo! a sight appeared, proving good St. Nicholas to be a saint of his word.

Every shoe was filled to overflowing; and beside each stood a many-colored pile. The table was heavy with its load of presents,—candles, toys, trinkets, books and other articles. Everyone had gifts, from grandfather down to the baby.

Little Katy clapped her hands with glee, and vowed inwardly that the cat should never know another moment's grief.

Hendrick capered about the room, flourishing a superb bow and arrows over his head. Hilda laughed with delight as she opened a crimson box, and drew forth its glittering contents. The rest chuckled, and said, "Oh!" and "Ah!" over their treasures, very much as we did here in America on last Christmas Day.

With her glittering necklace in her hands, and a pile of books in her arms, Hilda stole toward her parents, and held up her beaming face for a kiss. There was such an earnest, tender look in her bright eyes that her mother breathed a blessing as she leaned over her.

"I am delighted with this book: thank you, father!" she said, touching the top one with her chin. "I shall read it all day long."

At the last, little Huygens, taking advantage of the increasing loudness of mynheer's tones, had ventured a blast on his new trumpet; and Wolfert had hastily attempted an accompaniment on the drum. Therefore, when the youngsters saw that the mother looked neither frightened nor offended, they gathered new courage. The grand chorus rose triumphant; and frolic and joy reigned supreme.

This attractive picture book tells the original story of a family struggling to survive, without the lengthy didactic social, geographical and historical material included in the original novel. This version, with only a passing reference to St. Nicholas, makes the original tale accessible to contemporary readers. Purchase from amazon.com, amazon.ca or amazon.uk.