Every year since 1966 the village of St. Nikolaus im Warndt, Germany, has had a special post office, authorized by Deutsche Post, with a special St. Nikolaus postmark. They have also issued a number of cards, postcards, stickers and other things. Answering letters from children is now a part of the post office. St. Nikolaus sends his replies on specially designed stationery—a new design each year. This letter was sent in 2009.

Hello! The letter you sent me was very nice. Thank you very much for it!

I'm always happy at this time of the year, when the Nikolaus Post Office is opened and I receive mail bags full of letters from children from around the world.

I immediately start answering all those nice letters.

When the day's work is done, I light a fire in the fireplace and I relax in my wooden rocking chair by the fire. Then I can think about all those fine letters that I receive. Sometimes, I think of the old times. For example of the day when I helped the seamen who were in grave danger.

I'm sure you know everything about it!? What? You do not know what I'm talking about? OK, Let me tell story:

A long, long time ago, a ship, loaded with a rich cargo, was sailing on the high seas when, all of a sudden, a very heavy storm came up. The sails were whipped around, the masts knocked over, and the ship developed a heavy list. The crew was afraid the ship would capsize and sink. Even their experienced captain had no idea how to solve this problem.

In their despair, the seamen asked their headsman St. Nikolaus for help. Upon that, the holy bishop appeared tto hem. He helped them to take heart. Together they repaired the sails and the masts. Shortly after that, the sea calmed down and the strong wind died down. But St. Nikolaus was no longer to be seen.

When the ship finally reached the safety of the port of Myra, the rescued seamen immediately went to the local church, to pray to God and thank him for sending help.

There, they saw St. Nikolaus. They ran to him and thanked him, too.

But he answered. "I didn't save you. It was your faith and God's mercy that helped you. Keep believing in him and no harm, will ever be done to you."

After that, the seamen made St. Nikolaus their patron saint.

Now I've told you enough of my life, time to go back to work. Some more mail bags have arrived. I have to sort them, answer them, and then I have to put my very special Nikolaus stamp on them.

Take care—and maybe you will want to send me another letter next year. I'm Looking forward to it!

I wish you and your family an exciting Advent season,
a very happy and peaceful Christmas and a Happy New Year. 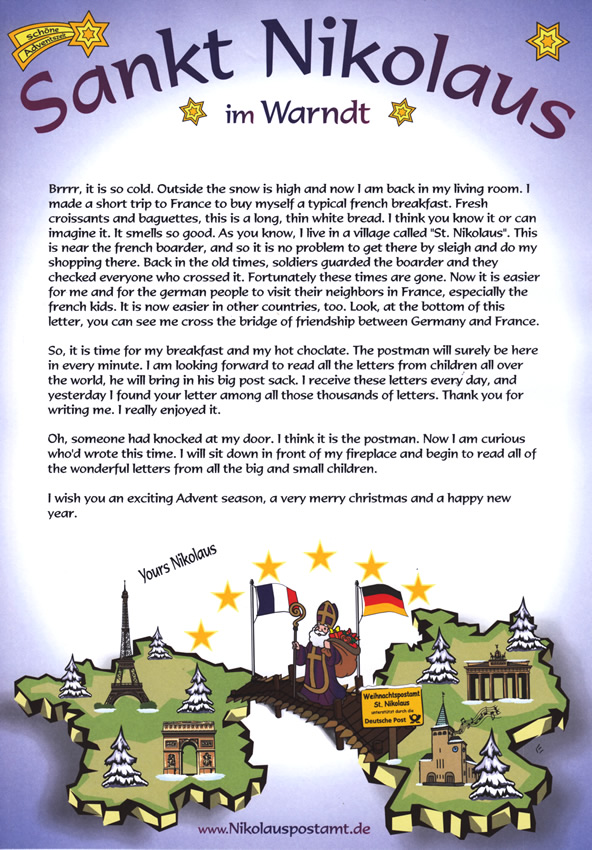