Once every 350 years Eid ul-Fitr, the sugar feast that ends Ramadan, falls on the same day as Sinterklaas festival. This happened in 2002. The local Imam invited Sinterklaas to visit Uli Camii mosque in Zwolle. Two traditions came together to celebrate the very rare shared date.

Tell a friend about
stnicholascenter.org
Thank you!
Listen to Sinterklaas Songs

In mid-November Dutch television broadcasts the official entry into the Netherlands of St. Nicholas and his helper Zwarte Piet live to the nation. Coming by steamer from Spain, each year they dock in the harbor of a different city or village. Wearing traditional bishop's robes, Sinterklaas rides into town on a white horse to be greeted by the mayor. A motorcade and a brass band begin a great parade which leads Sinterklaas and his Piets through the town. 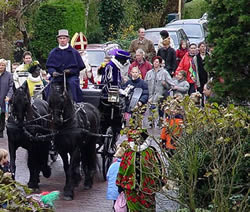 Nearly every city, town and village has its own Sinterklaas parade. He usually arrives by horseback, but occaisionally he comes by boat, carriage, moped, or helicopter.

In the following weeks before St. Nicholas Day, December 6, Sinterklaas goes about the country to determine if the children have been well-behaved. He and his Zwarte Piet helpers visit children in schools, hospitals, department stores, and even at home. Bakeries are busy making speculaas, molded spice cookies, for the season.

During this time children sing Sinterklaas songs and put their shoes next to the window or door, or, by the fireplace or heater, along with a nice drawing, a wish-list and a carrot or hay, and maybe a saucer of water, for the horse. If St. Nicholas happens by while checking on their behavior, the next morning children may find chocolate coins or initial letter, candy treats, pepernoten, and little gifts in their shoes. Everyone hopes for sweets, not coal or a little bag of salt. In some families he may stop by every night, but usually just once or several times—and not if the children have been naughty that day or forgot to sing their songs!

Tangerines are also an important part of the feast—major grocer Albert Heijn sells around 18 million tangerines, in eight varieties, during the week of December 5. They were first imported in the early 1800s, becoming the "apples of orange" from Spain and came to represent the gold St. Nicholas had given to the poor girls.

The Dutch celebrate Sinterklaas on December 5th, St. Nicholas Eve, with festive family parties when gifts and surprises are exchanged. If the 5th falls on a school day, schools close at midday, allowing children's happy anticipation of the evening's activities. In the Netherlands, unlike other places, adults as well as children join in the fun. As the Dutch like an element of surprise, a small gift may be wrapped in a huge box, or it may be hidden and require following clues to discover where it is. 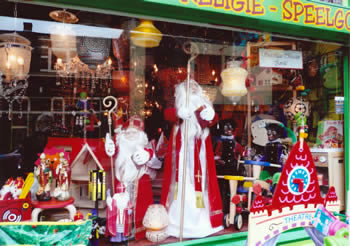 Gifts are prettily wrapped in special Sinterklaas paper or they may be hidden, for example, in a potato or an old sock. Each gift, anonymously signed "from Sinterklaas," comes with a clever rhyme that may point out a person's shortcomings in a humorous way. (For the less creative, there are books with suggestions for making rhymes and packaging disguises.) Originality, not value of the gift, is what counts.

Children sing traditional Sinterklaas songs while waiting for the saint to appear. A knock comes on the door and a black gloved hand appears to toss candies and pepernoten inside. Children scramble to gather up the treats. A large burlap bag, "de zak van Sinterklaas," also appears filled with gifts. At the table, decorated with speculaas and other sweets, guests may find their initial in a chocolate letter at their places. Food is apt to include hot chocolate, Bishop's wine, and letter banket.

The Dutch feast of Saint Nicholas is about giving, for "it is in giving that we receive." The fun is in trying to surprise people, to tease in a well-meaning way, to make a good joke, to produce a rollicking rhyme. The gift itself is just a bonus, as the fun is in the doing.

Sinterklaas is the most important tradition for the Dutch, a 2008 Centre for Dutch Culture survey found. Celebrated the evening of December 5 with traditional tasty foods, it is the main time for family gift-giving. The second ranked tradition is decorating a Christmas tree, followed by Queen's Day, April 30. Blowing out birthday candles and eating raw herring were also in the top ten. 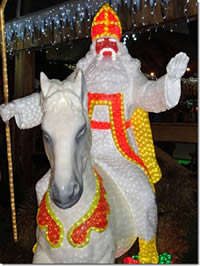