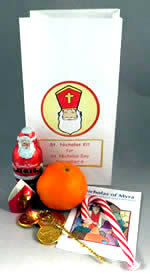 Coins in plastic baby booties may be used as table favors or placed in children's shoes, as done at St. Thomas of Canterbury Episcopal Church in Temecula, CA.
Booties available from Partyfavorsplus
St Nicholas Churches
around the world

Poster in our shop!

Let St. Nicholas help recover the joy and holiness of Advent & Christmas. Devotional booklet with scripture and reflection for all the days of Advent and Christmas; St. Nicholas shows how to live with true Christian compassion and generosity while leadeing to the Bethlehem manger. Purchase from amazon.com.
Other Ways to Highlight St. Nicholas

Give in Secret
Members have decided to reclaim St. Nicholas all year around. They are doing things locally for others in secret, believing it's more Christian to give in secret—like St. Nicholas.
—Central United Methodist Church, Decatur, Alabama

Be Like Nick!
Church members go into the neighborhood asking neighbors to "be like Nick" by contributing Christmas presents for children who come to the church food pantry and a nearby school. Parishioners leave a bag to be filled with a new toy or other children's gift; bags are collected later. Another way members and neighbors can "be like Nick" is to donate money for gift cards to help needy families purchase winter coats and shoes.
—St. Nicholas Episcopal Church, Elk Grove Village (Chicago), Illinois

Taking St. Nicholas to the Street
Members of St. Philip Orthodox Church, Souderton, commemorate St. Nicholas by giving three dollar coins to homeless people in central Philadelphia. This is an extra seasonal treat, added to the sandwiches, fruit, clothing, toiletries and goodies shared every Thursday and some Tuesdays.
—The King's Jubilee, Philadelphia, Pennsylvania

St. Nicholas Project
The community based project in Valencia and Northern Socorro counties collected books and funds so parents could purchase an outfit and a toy and choose a book for each of their children. The gifts were then gift-wrapped for parents to take home. This gave parents the opportunity to give gifts that they had chosen for their children, providing one-time help in hard times. The Archdiocese of Sante Fe and Our Lady of Belen Catholic Church were strong supporters. The project, patterned after a similar one in Albuquerque, continued for nine years.
—Vequita, New Mexico

Spread St. Nicholas Spirit
Our 1st grade Parish School of Religion class has elected to honor and celebrate St. Nicholas by performing secretive good deeds and posting them to "St. Nick's Little Helpers" section on our website. Our aim is to create a chain reaction of kindness all over the world, starting with our little corner in a classroom in Medina, Ohio. We hope the stories posted here will foster within a desire to live as St. Nicholas did. He lived for God, and he lived for love. St. Nicholas offered hope and strength to people in need. He was driven by the desire to give, and never was motivated by what he could get in return for his kindness. We can think of no more beautiful sentiment than to give of ourselves, just for the sake of giving. Our first graders loved the idea.
—Therese Durny, Holy Martyrs Church, Medina, Ohio

Collection for the Homeless
Starting in November, members bring new socks, mittens, and gloves, individually wrapped small candies and chocolate bars, and cough drops and throat lozenges. At the end of the month they are put into goodie bags to be distsriubted near Saint Nicholas Day.
—St. Herman's Orthodox Church, Langley, British Columbia, Canada

Lenten Boxes
Members are given cardboard banks to place the money saved from te Lenten fast--not purchasing meats, cheese, etc. At the end of the season they are brought back and placed under the icon of Saint Nicholas. The money is used to feed those in need.
—St. Elizabeth the New Martyr Orthodox Mission, Kentucky

St Nicholas Visitors
These prepared and commissioned lay members show the love of Christ by doing pastoral work within the parish. They give their time and care to others, following the example of St. Nicholas. The visitors are commissioned at the annual St Nicholas Patronal Festival.
—St Nicholas' Church, Child Okeford, UK

Use icons to talk about St. Nicholas
This is St. Nicholas. He was a very powerful figure in the early church.

When you are baptized, you are given the name of a saint. Sharing the name of a saint is important in Orthodox tradition because a person shares a special relationship with, or affinity, to that saint. The saint's Feast Day becomes a person's Name Day.

Celebration of the Name Day is more important that one's birthday because it marks our baptism, the day of our rebirth. We say that the first birth ends in death, but the rebirth ends in life.

In Greek Orthodox tradition, gift-giving for St. Nicholas Day is not typical. Instead, it is celebrated as other saints days—by calling upon the saint to intercede, and singing hymns to St. Nicholas.

The Orthodox prayer for St. Nicholas Day is simple: "As rule of faith and picture of gentleness, and teacher of temperance, you were shown to your flock, by the truth of evidence; thus you achieved the lofty through humility, the abundant through poverty. O Father and Hierarch Nicholas, intercede with Christ our God, that our souls may be saved."
—Father Nicholas Kasemeotes, Holy Anargyroi Greek Orthodox Church, Rochester, Minnesota

St Nicholas Stockings & Cards
Each year the Samaritan Ministry fills over 100 St. Nicholas stockings with small useful items—tissues, lip balm, tooth paste, hand sanitizer, lap throws, an apple, orange, etc. On St. Nicholas Day or the day before, the stockings are delivered to parishioners who are homebound or nursing home residents. Each stocking comes with a card made with a picture of St. Nicholas and a bit about the saint (PDF to make cards). The project brings such pleasure to the homebound.
—Samaritan Ministry, St. Mary of the Immaculate Conception Catholic Church, La Porte, Texas

Child-Friendly Worship
We honor the memory of St. Nicholas by making a place for children in all that we do. Children are always welcome in church at St. Nicholas, but the 4th Sunday of each month is always "Especially For Children." Children take part in the procession, in the special children's sermon, and other aspects of the service.
—St. Nicholas Episcopal Church, Darnestown, MD

Child-Focused Outreach
We honor the memory of St. Nicholas in the way we do our Outreach. Our primary outreach programs, both at home and abroad, are focused on children and families with young children. For example, locally we work with Germantown HELP to feed needy families—children from the parish regularly go there to pack up grocery bags of food. Internationally, we support El Hogar, a vocational school for orphans in Honduras, and we have "adopted" a young boy at El Hogar.
—St. Nicholas Episcopal Church, Darnestown, MD

Summer Festival: St. Nicholas introduces the church year
Christ Church took part in a community festival marking the centenary of a park. A large Saint Nicholas mannequin "greeted" people at the church door and he "told" the story of the church's liturgical year in a booklet, A Year in the Life of Your church . . . as told by St Nicholas, introducing the church year to children and others. Nicholas was chosen because he is familiar and many visitors would be unchurched. As the narrator, St. Nicholas "walked" people through the year. The booklet contained a prayer for the community, introduced St. NIcholas and had paragraphs for Advent, Christmas, Epiphany, Candlemas, Lent, Good Friday, Easter, Petercost, Trinity, Harvest, Remembrance (All Saints), and Christ the King. The booklet closes with "What an incredible story! Each year we follow the same pattern. Each year we learn something new about the wonderful God of love, through listening to the story again, and again. . . ."
—Christ Church, New Catton, Norfolk, England UK

The Flag of St. Nicholas

St. Nicholas is the patron saint of Bramber and of our church, and also one of the most well-known and well-loved saints of the Christian tradition. His flag consists of three gold spheres on a blue field, and we fly this flag from time to time throughout the year, especially on local church occasions and around the Feast Day of St.Nicholas, which is 6th December.
—Parish Church of St. Nicholas, Bramber, England