Entering a church-sponsored float in a local Christmas parade is good publicity for a church and also increases public awareness of the true Saint Nicholas, Bishop of Myra. St. Nicholas Episcopal Church, Hamilton, Georgia, decorates a parishioner's trailer, transforming it into a snowy scene for Saint Nicholas and a bevy of elves (children from the parish). The elves wear Santa hats and green or red felt elf-collars. The collars make simple, festive, elf costumes when worn with contrasting color tops. The parade entry includes the priest and others carrying the St. Nicholas Episcopal Church Welcomes you banner. More photos 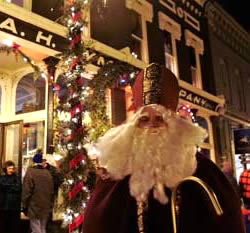 [In 2005 Holy Trinity Episcopal Church] took part in the Victorian Sleighbell Christmas parade in our hometown. Our float featured St. Nicholas in full costume and the children of the parish in Victorian costumes. Some of the children we dressed as wealthy children and others as poor children.

The next day, which was the Sunday closest to St. Nicholas day, St. Nicholas came to church and told the children stories about helping poor children. This way we help the children become involved with needy families.

By the Rev. Celine A. Burke, Whose Birthday is it, Anyway?, 2006. Used by permission of ALTERNATIVES for Simple Living. "Equipping people of faith to challenge consumerism, live justly and celebrate responsibly," Resources for responsible living since 1973