Relics of St. Nicholas—
Where are They?

Saint Nicholas' primary relics are located in a tomb in the crypt of the Basilica di San Nicola, Bari, Italy. They have rested there since 1087. Many places lay claim to St. Nicholas relics, as listed below.

The second major repository for St. Nicholas relics is in the monastery church of San Nicoló in the Lido of Venice, Italy.

Romania
Targu-Mures: Church of St. Nicholas (Greek Catholic Church)
Given by the St. Nicolas Cathedral in Fribourg, December 5, 2008
Bucharest: Church of New Saint George (Sf Gheorghe Nou) (Orthodox) (right hand)
Given to Prince Michael the Brave by the Archbishop of Bari in 1599 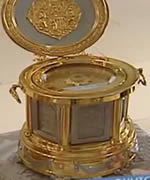 Scotland
Aberdeen: Kirk of St Nicholas
Before the Reformation

Switzerland
Fribourg: Cathedral of Saint Nicolas (Roman Catholic)
Brought from Rome ca 1420 to the Cistercian Abbey of Hauterive, then to Fribourg, May 9, 1506

We do not worship relics any more than we do the sun or moon, the angels, archangels, or seraphims. We honor them in honor of He whose faith the saints gave witness. We honor the Master by means of his servants.
— St. Jerome
Like Roman Catholics, Orthodox Christians believe that the grace of God present in the saints’ bodies during life remains active in their relics when they have died, and that God uses these relics as a channel of divine power as an instrument of healing.
— Bishop Kallistos Ware
Wherever relics are kept, you find people praying, and not just in their minds but with their bodies, kneeling or prostrating. There is a powerful sense of heaven and earth rubbing against each other. Pilgrims tend to be people who have overcome the temptation to regard relics with suspicion. They reckon that, in most cases, those who found and preserved relics were people who were careful about the truth and were well aware that committing fraud is a grave sin. Lying has never been a plus point for anyone hoping to get into heaven. And if mistakes were sometimes made, or deceptions arranged by people driven by greed, no matter. God will regard the pilgrim’s reverence for a relic as veneration for what it represents rather than what it is.
— Jim Forest, The Road to Emmaus: Pilgrimage as a Way of Life

A pelvic bone held in Illinois is examined at Oxford University
St. Nicholas in the Antalya Museum
Examination of the museum's bones
The Real Face of St. Nicholas
Forensic reconstruction based on anatomical data
How Saint Nicholas may have looked
Several interpretations based on data and digital techniques
Traveling Relics
St. Nicholas relics travel from Bari, Italy to Russia