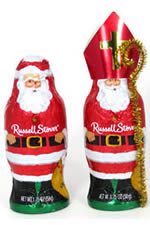 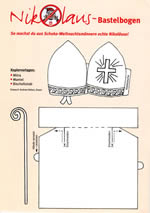 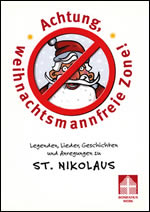 Booklet with Legends, songs, stories and suggestions for St. Nicholas

"Santa Claus is becoming too popular and it is the Americanization of our society that people are afraid of," said Wim Kunst, Assen, the Netherlands.

As this sentiment increased among Europeans during the early 1990s, action groups sprang up to save or protect St. Nicholas as the authentic traditional gift-giver. People in the Netherlands, Belgium, Germany, Austria, and the Czech Republic, spoke out as they felt their St. Nicholas customs were under threat from American Santa Claus. Santa Claus is often seen abroad as a symbol of global consumer capitalism. This view is interpreted as rewarding individual self-interest overn self-giving. In reaction to this American cultural imperialism, action movements developed to support, strengthen, or return to traditional customs, food, and gift-givers.

In some places—the Netherlands and Belgium— the goal is simply to delay Santa and everything Christmas until after St. Nicholas (Sinterklaas) is finished on December 6. In others—Germany, Austria, and the Czech Republic—the intent is to completely avoid the Weihnachtsmann/, the Christmas Man or Santa in favor of the traditional gift-givers, Sankt Nikolaus for St. Nicholas Day and Christkind who comes at Christmas.

Santa Claus, beat it on your sleigh.
Back to your house, in the U.S. of A.

So sang a Dutch country band, the Amazing Sugar Waffles, in Assen, 1994. The Assen Sinterklaas Committee was concerned because Christmas was coming earlier and earlier each year and it looked like their Dutch Sinterklaas tradition was being crowded out. Signs with the universal "forbidden" symbol over Christmas trees and reindeer were put on all the streets coming into Assen. They said, "No Christmas until 6 December" (Dutch Sinterklaas festivities are on 5 Dcember, the eve of St. Nicholas Day). In 2012 large banners with the "Tot 6 December" symbol were placed over billboards advertising Assen's Christmas market, with the message, "Assen is a Sinterklaas town and Santa will have to wait." The committee works to keep all Christmas-related activity out of sight until Sinterklaas is finished.

In 2008 Amsterdam advertising agency Being There distributed 1000 Sinterklaaspieks, with raised, clenched fist, to be given in protest to people who had Christmas or Santa Claus things out before December 6th. The plastic Sints were free to people sending stamped, self-addressed envelopes.

Boomerang in Amsterdam joined the cause with "Boomerang supports Sinterklaas" cards in 1997. They have continued offering other Santa/Sinterklaas cards, too. 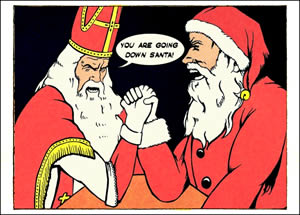 Some in Flemish Belgium also wanted to keep Santa away until after December 6th. In 1994 the Sint-Nicolaas Genootschap (St. Nicholas Society) placed a signboard at the entrance to the town, making it clear that Santa was only welcome after 6 December. 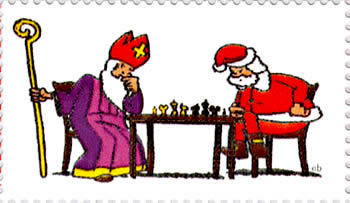 Who will win? Santa or St. Nicholas?

In 1997 Fr. Eckhard Bieger, Frankfurt, launched the Frankfurter Nikolousinitiative—anti-Santa—campaign to show the difference between the traditional figure of Sankt Nikolaus and the Christmas Man—Santa Claus. Saint Nicholas is a model for social engagement and compassion, not a marketing tool. In the first year 5000 stickers in support were sold by December 4th.

Bonifatius Werk in Paderborn, leads the effort with the Weihnachtsmannfreie Zone! The Diocese of Rottenburg-Stuttgart's Nikolausaktion, the Federation of German Catholic Youth and the Diocese of Speyer's Vorfahrt für den Nikolaus (Think Nicholas), and Frankfurt's Frankfurter Nikolausinitiative e.V., that started it all. These groups promote a season focused on St. Nicholas' values of care for those in need and love for children, rather than a commercial frenzy of activity and expense.

What do you do if you can't find chocolate figures of Bishop Nikolaus? Silvia Englberger, Osterhofen, had that experience in 2006. Having been told that they were plentiful in Austria, she crossed over in mid-November. Alas, Austrian shopkeepers said that so many German customers from Bavaria come and had already snatched them all up. Undaunted, she contacted the Austrian company Hauswirth just in time to get their last 100 figures. She distributed the chocolate Nicholas bishops at church the next Sunday. 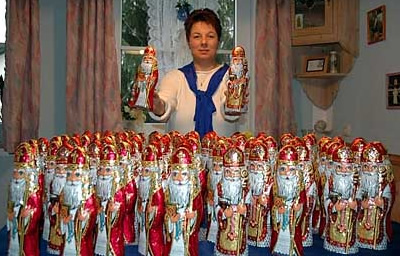 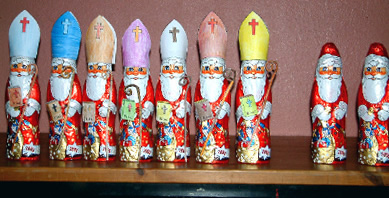 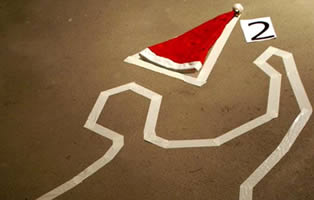 A case of self-defense?
Photo: Aloha,evangelisch.de 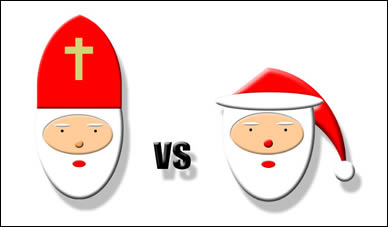 In 1998 a group of Austrian activists founded Pro-Christkind.org "to promote the original meaning and character of Advent and Christmas." They wanted to bring back Sankt Nikolaus and Christkind in place of the Weihnachtsmann or Santa Claus.

It was reported in 2006 that Vienna's deputy mayor was banning Nikolaus from kindergartens. That was very controversial and thousands signed on to keep Nikolaus, saying children love Nicholas and he should stay. Actually the mayor's office said it only wanted to keep the "scary" figures from children and that Nicholas should only be portrayed by someone the children knew. It may have been a way the mayor was trying to keep the very frightening and dangerous Krampus character away from young children.

The town of St. Wolfgang has banned Santa from its local Christmas market. The vendors are required to offer only traditional Austrian products and typical local foods. 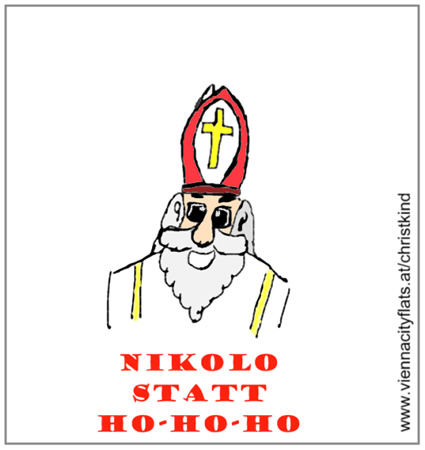 "Nicholas instead of Ho-Ho-Ho"
Image: viennacityflats.at

During the Communist years, traditional Czech gift-givers, Mikuláše—St. Nicholas, who comes on December 6, and the Christ Child, coming on Christmas, were supressed in favor of Grandfather Frost. Now it seemed as if Santa Claus was simply taking over, crowding out these traditional Czech customs. It was happening especially with commercial activity and advertisements. So, in 2008 the Creative Copywriters Club, a marketing organization, began the AntiSanta project, "Save the Baby Jesus."

The goal is to uphold traditional Czech traditions and customs. Santa Claus was showing up more and more everywhere in shops, as chocolate figures and on Advent calendars, as well as in ads. The project believes Santa is a marketing figure, whereas, the others are rooted in history and religion. Merchants have seemed to confuse the two figures of Mikuláše and Santa.

The group has sponsored a variety of creative projects. One year Santas were temporarily held in the Prague Zoo. It was reported that they were pests and could not be allowed to roam freely. The zoo attendants carefully studied their habits and stockpiled supplies of fries, burgers and colas, along with cookies and milk, to properly care for the Santas. The Santas were to be crated and returned to their homeland on the 23rd of December, before Christmas Eve.

In 2008 Children and Youth Astra Zlin held a school art contest, "Nicholas or Santa Claus?" Awards were given at the local shopping center and the best entries exhibited at the Museum of Southeast Moravia in Zlin.

Shoppers are encouraged, when encountering Santa in shops or advertisements, to send a photo to AntiSanta and a note like this to the merchant:

Dear Sirs,
A lot of us dislike the senseless use of Santa Claus in the Czech environment. We do not have to copy everything after all, we already have a beautiful Christmas tradition. In the Czech Republic presents definitely come from Baby Jesus.

Look at antisanta.cz—it was begun by a few enthusiasts, who started an avalanche and now it is a whole movement. And all those people are your potential customers . . . . 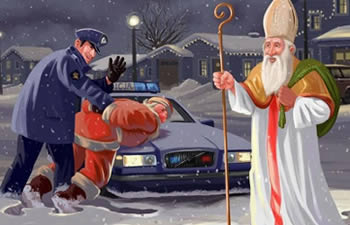 St. Nicholas gives chocolate, nuts and fruit to children, while also giving sage advice. However, he is getting confused with Father Christmas (Santa Claus) who fills stockings and brings gifts on Christmas Day. The two figures are getting confused, so in 2011 the Roman Catholic Church in Canton Aargau held the first ever "Samichlaus Synod" in Wislikofen.

The synod was so popular that all 90 places filled, with 40 more being turned away. Samichlaus is still well understood and observed in the countryside. The tradition is not so much alive in the cities and the church is working to get the message across.

Sessions included how to make a kindergarten visit, dealing with difficult children, and how to tell the traditional St. Nicholas story.

Who will be the primary winter holiday gift-giver? 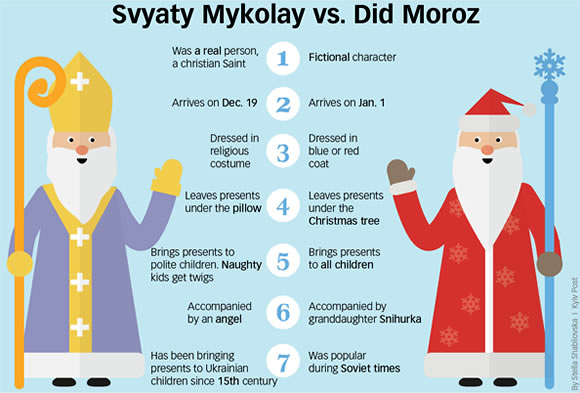 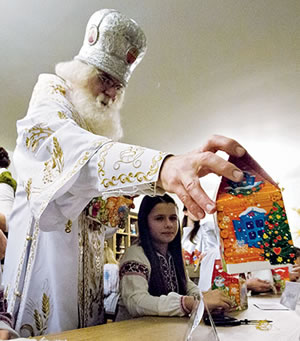 "Ukrainians have for centuries honored Svyaty Mykolay," says Kostyantyn Oliynyk, director of Kiev's ethnographic museum. He continues, "The first written records of Ukrainians celebrating Svyaty Mykoyay's Day by giving presents to children and to the poor date back to the 15th century. It's good that we're returning to our roots, that we remember Svyaty Mykolay and his good deeds."

Charity events to benefit children in need are now being organized in Svaty Mikolay's name by non-profit organizations, cafés and restaurants. The main Kiev post office hosts a special post office to where children may mail letters to Mikolay. It is open from December 15 through January 7. Children may visit him there and have photos taken, too.

On his day, Decmeber 19th, Svaty Mikolay lights the Christmas tree in Sofiyivska Square to open the New Year and Christmas holidays.

What do these two figures do?

Svaty Mikolay comes during the night on December 19th, bringing gifts to well-behaved children. The presents are left under children's pillows. Naughty children may receive only a twig.

Ded Moroz comes on New Year's Eve. Though he is losing ground, he still comes regularly to kindergartens and primary schools. So he is observed in many Ukrainian homes.

Children benefit as many families tell their children about both Svaty Mikolay and Ded Moroz, saying that the winter holidays are for children and receiving gifts twice is not such a bad thing. Even if parents favor one gift-giver over the other, they still buy sweets or gifts for both ocaisions, not wanting to disappoint their children. It may be sweets for Ded Moroz and more significant gifts come from Svaty Mikolay. As of 2017, 27.5% of Ukrainians expected gifts from Father Frost, followed by 14.3% from Saint Nicholas, and 2% from Santa Claus. 28.6% didn't want gifts from any of them.

Though things are shifting Svaty Mikolay's way, only time will tell who will prevail.