Saint Nicolas is Back: Rodange

During World War II American soldiers brought a bit of joy to children in a town, long suffering the privations of occupation and war. 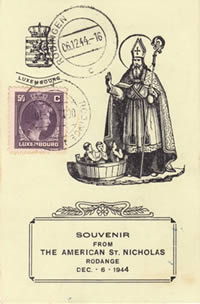 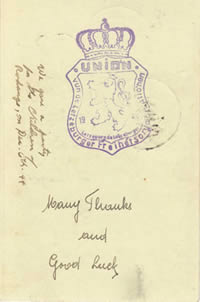 Note on reverse: We gave a party for the children of Rodange, on Dec. 6th - 44
Souvenir card courtesy of J M Rosenthal

What a joy it was, a real huge one, on Tuesday afternoon in the boys' school in Rodange. In the morning at 10 o'clock an American car drove into the schoolyard; an American soldier with several buddies stepped out and delivered a dispatch in the school hall: Saint Nicolas from America brought back the Luxembourger Saint Nicolas and at 2 in the afternoon they would come, with the Ho'seker*, to the school.

Thereupon, the children in the school sang, full of joy, all the songs, beginning with the old known songs that our fathers and mothers already sang to the most recent ones. At 2 o'clock the little ones were waiting in the hall, waiting for their friend from heaven. A siren howled creepily and loud . . . and in the distance one heard music playing, coming closer and closer. Now, they were in the courtyard.

The Saint Nicks, the American and the Luxembourger, got out of the car. Quickly they entered the hall. Then our St. Nick said: "You see, children, the American St. Nick has brought me home again." He said, that under the Fritz,** he had to flee and hide. He was now as happy as the children, to be back. The two St. Nicks entered their little house and the Ho'seker stayed behind, so that no bad and evil child would scurry by.

Every child then entered and re-appeared with a big bag. It was a beautiful day. The memory will linger for a long time with our children: that the Americans meant so well for them.

One week later, on December 16, the Germans launched their Von Rundstedt Offensive through northern Luxembourg; the awful Battle of the Bulge (December 16, 1944 – January 25, 1945), the largest and bloodiest battle fought on the western front in World War II, had begun.

* Ho'seker: St. Nick's companion, a dark sinister figure, clad in a tattered black robe with a big sack on his back in which, legend has it, he will place all naughty children. He usually carries lots of switches to chastise bad children.

**Fritz: a name given by the British and other Allies to German troops in World War I & II.

back to the United States