Advent Saint
The Silver Rose of St. Nicholas of Myra

A unique ecumenical award named for St. Nicholas, the most ecumenical of saints 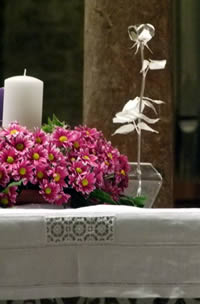 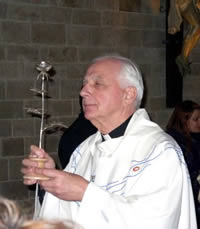 The Silver Rose of St. Nicholas of Myra is an ecumenical award given to a person:
• whose life, like St. Nicholas, shines forth with God's goodness and kindness;
• who is rooted in the life of the church and gives witness by the power of the Holy Spirit to the church's mission to the whole world;
• who, thereby, contributes to reconciliation and deepened communion of the whole Church, humanity, and all creation.

The Silver Rose is both an academic and ecclesial honor, demonstrating that theological reflection is fruitful only when linked to one's personal life in the service of the larger Church community.

The Ecumenical Institute, University of Fribourg in Switzerland, together with the Eastern Churches Institute, Regensburg, Germany, instituted the award. The three founders, Monsignor Nicholas Wyrwoll (Director of the Eastern Church Institute), Prof. Guido Vergauwen (Director of the Ecumenical Institute) and Prof. Dr. Barbara Hallensleben (Professor of dogmatic theology & ecumenism, University of Fribourg, with other significant ecumenical positions), consult with the Chapter of St. Nicholas Catheral in Fribourg in selecting each awardee.

The Silver Rose of St. Nicholas is patterned after the Golden Rose, a papal honor that has been given on the third Sunday before Easter since before 1050, perhaps even as early as the 8th century. The Golden Rose is blessed and presented to individuals or places that have worked for the good of the Catholic Church.

The Silver Rose is made of silver with a small box in the flower to hold balsam scented oil, a sign of the fragrance of the knowledge of Christ in every place (2 Corinthians 2.14). A ruby is on the top of the box. The first silver roses were made in by the Benedictines of Münsterschwarzach Abbey; since 2011 they are made by Silber-Schmiede Tischner in Neustadt an der Waldnaab, Germany.

Monsignor Nicholas Wyrwoll takes the Silver Rose on pilgrimage to St. Nicholas' crypt in the Basilica di San Nicola in Bari, Italy, where it is placed on the tomb. The honoree for the next year is announced at the basilica on the Feast of St. Nicholas, December 6th. The name is given to the Bishop of Rome, requesting Apostolic Blessing. Pope Benedict, in a homily given in Bari, stated:

. . . It was here in Bari, in the city that guards the bones of St. Nicholas, a ground for meeting and dialogue with Christian brothers and sisters of the East, that I want to reaffirm and accept the basic task, to work with all strength for the restoration of the full and visible unity of all who follow Christ. I know that a sign of good will is not sufficient. Concrete signs that penetrate the soul and move consciences are needed to challenge us all to the inner conversion that is the prerequisite for any progress on the path of ecumenism. I ask you all to tread with determination the path of spiritual ecumenism, with prayer for the Holy Spirit to open the doors—for the Spirit, who alone can create unity.

The award ceremony usually takes place May 9th at the Ecumenical Institute of Fribourg University. 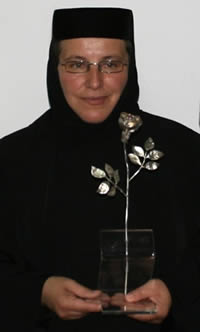