On his missionary journeys the Apostle Paul stopped in both Patara and Myra; Patara during his third voyage and Myra during the fourth. 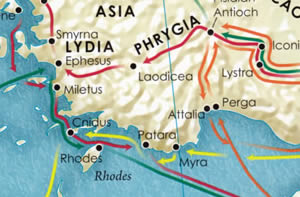 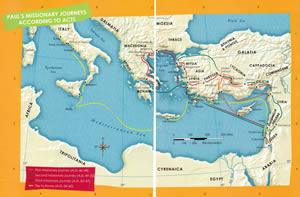 Patara was St. Nicholas' birth place and where he grew up. His parents and the other Christians there were surely influenced by St. Paul's missionary activities. He may have had a part in establishing the Christian community in Patara. As recorded in Acts 21.1-2, "When we had parted from them [Ephesian elders, in Miletus] and set sail, we came by a straight course to Cos, and the next day to Rhodes, and from there to Patara. When we found a ship bound for Phoenicia, we went on board and set sail."

In his last journey St. Paul stopped in Myra, as recorded in Acts 27.5-6, "After we had sailed across the sea that is off Cilicia and Pamphylia, we came to Myra in Lycia. There the centurion found an Alexandrian ship bound for Italy and put us on board." Myra, of course, is where Nicholas served as bishop and is the place where he lived out his life, faithfully serving God and the church.

We don't know how long Paul was in these places nor what he did while there. However, it is likely that Christians in both Patara and Myra were influenced by the Apostle Paul's activities there and in the region. This influence would have continued to shape Christian belief and tradition through the years into the third and fourth century when St. Nicholas lived.

Living and working in one of the very areas where the early church developed ties St. Nicholas to the New Testament. The early church was still being defined during Nicholas' lifetime. The First Ecumenical Council of Nicaea, AD 325, which Nicholas attended, was the first attempt to find consensus about belief regarding the nature of Jesus and how he relates to God the Father. It also determined a uniform date for Easter and the developed the first canon law.

St. Nicholas stands in the tradition of St. Paul, as one of the early church fathers who contributed to the understanding of church which we have today.