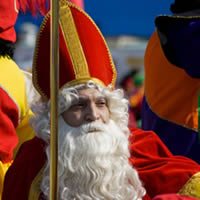 Dutch colonialists brought their customs to Suriname—as they did wherever they went. The Sinterklaas tradition here has had its ups and downs as some regard it as an unfortunate holdover from colonial times while others see it as a harmless bit of fun for children.

The celebration of Sinterklaas was officially abolished during the 1980s. At that time the day became known as "Children's Day." However, the custom didn't disappear and continued to be observed with particular encouragment from commercial interests.

Sints and Piets have visited schools and hospitals, as well as making public appearances.

Sinterklaas and the Pieten sometimes take on different looks in Suriname. Some Sints are in white-face and the Pieten may have variously colored faces.

The Ministry of Education abolished the celebration from schools, beginning in 2014. The Senate has also discussed Sinterklaas with disapproval. Sinterklaas is seen as colonial and Zwarte Piet as racist. Time will tell how Sinterklaas survives in Suriname.